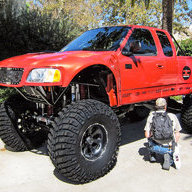 Like the first LHD prototype, this pickup is also equipped with running boards and Raptor-like wheels wrapped with beefier off-road tires. It’s also wearing what at first glance might appear to be a bed cap, but it’s a bit too small to be a prototype part like the one Ford Authority recently spotted on a Ford Maverick prototype.

Instead, this cap is yet another form of camouflage, being used as a cover to hide something that Ford doesn’t want us to see. What that might be is unclear, but the cap camo is most definitely designed to disguise whatever lies underneath it. Otherwise, the rear of this prototype is identical to the earlier one, with a pair of exhaust pipes flanking each end of the rear bumper.

As Ford Authority exclusively reported in May, the next-gen Ranger Raptor will be powered by Ford’s 3.0L EcoBoost V6, mated to FoMoCo’s 10-speed automatic transmission.

The next-gen Ranger will continue to ride on Ford’s T6 platform, albeit with some modifications. The Ranger Raptor will also continue to feature a bespoke suspension with Fox shocks and a coil spring rear suspension when it launches next year.

Ugga Mugga said:
Instead, this cap is yet another form of camouflage, being used as a cover to hide something that Ford doesn’t want us to see.
Click to expand...