Well, the all-new P703 Ford Ranger reveal has come and gone, and if you were watching from a desk top like I was, then you are probably left a little dazed and confused. But you also probably noticed that Ford flashed a QR code teasing the debut of an upcoming performance variant of the truck, presumed to be the Ranger Raptor. And it confirms a high-output, twin turbo V6 engine, likely shared with that of the Ford Bronco Raptor, and Ford Explorer ST. No more poky diesel. Next-Generation Ford Ranger Raptor: What To Expect
Well, what’s not to expect? The Raptor name at this point means the tip of the spear when it comes to off-road performance at high speeds, all starting over a decade ago with the original F-150 Raptor. Eventually came the Ford Ranger Raptor, but being a global market truck, that meant making do with a four cylinder turbodiesel engine; something that Ford was reluctant to federalize for the US market, and arguably more reluctant to designate the Raptor name to American customers that have elevated expectations (and pocket books).

What does that mean for the Ford Ranger Raptor? It means that it gets to borrow much of this hardware. For the US Market, both the Bronco Raptor and Ranger Raptor will share a similar architecture, are expected the share the same engine, and will even be built in the same assembly plant in Wayne, Michigan.

Will our friends in Australia and the rest of the world have the same spec Ford Ranger Raptor? For their sake, we certainly hope so. But we’ll have to wait until February 2022 to know for sure. Well 3 months to go! Wheres the countdown? Haha
I know it probably won’t happen but maybe just maybe this will be a dual “glabal” & NA market reveal??? (I know I know) 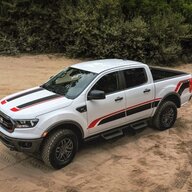